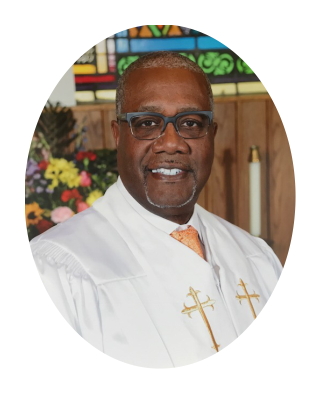 PASTOR ANTHONY JENKINS, SR., was born and reared in Oakland, CA, where a keen appreciation of his family’s southern roots and a deep love for God were instilled in him. In fact, his early spiritual development was nurtured at Taylor Memorial United Methodist Church, where he was a member of the congregation during his youth. He graduated from Skyline High School, in Oakland, and later received his calling to the ministry. This inspired Pastor Anthony to pursue theological studies and he earned a Bachelor of Theology, in 2002, from Trinity College of the Bible and Theological Seminary, in Indiana. He began his ministry at Taylor with the guidance of the Reverend Ron Swisher, before subsequently serving 4 years as Senior Pastor of Calvary United Methodist Church, in San Francisco, CA. During that time, Pastor Anthony also earned a Master’s Degree in Divinity in 2009, from the Pacific School of Religion of Graduate Theological Union (GTU) in Berkeley, CA.

Soon, he was appointed to the First United Methodist Church of Tracy and he was the circuit leader over 11 churches in the Central Valley of California. Then, in 2013, Pastor Anthony was selected to lead Temple United Methodist Church in San Francisco, and as the circuit leader over all of the San Francisco United Methodist Churches. In 2015, he was elected Chairperson of the Western Jurisdiction of Black Methodists for Church Renewal (BMCR). His oversight included all of the historically Black Methodist churches within the geographical area of the Western United States. Later, in 2017, he was elected Chair of the Inner Conference Committee on Ethnic Ministry Outreach for the Northern California and Southern Nevada regions. Shortly thereafter, everything came full circle when Pastor Anthony was installed in his current position as the Senior Pastor of Taylor Memorial UMC and as the circuit leader for the UMCs in the cities of Oakland and Berkeley.

Pastor Anthony is an extremely active member of our city and community. Over the past 20 years, he has not only shared his anointed gifts with Taylor Memorial UMC and with congregations all over the nation; but, he has also blessed the community at-large by offering Taylor as a haven for those needing the edifice for support. Under Pastor Anthony’s leadership, Taylor has hosted an Annual Pre-Thanksgiving Meal Extravaganza event where a free hot meal is served along with the provision of a bag of groceries and a clothing give-away to struggling members of our community. In addition to providing food and clothing during the holidays, he has guided Taylor to organize coat drives and toy drives to uplift our most vulnerable neighbors. In the midst of the Oakland Unified School District’s Teachers’ Strike, in February 2019, Pastor Anthony opened Taylor’s doors to feed & provide a safe place for OUSD students while their parents or guardians worked. He also offered Taylor’s various rooms as a resource for the OUSD teachers to use as a venue for meetings. He continues to work, via Taylor, to support hundreds of OUSD students and teachers. Moreover, Pastor Anthony provides counseling for residents of a federal halfway house, in Oakland, and he serves as a certified chaplain at the Contra Costa County Jail in Richmond, CA.

Pastor Anthony’s greatest passions are studying the Holy Word and spending time with his family. His lovely wife, Valerie Lipscomb-Jenkins, is also an Oakland native and his best friend. The couple is blessed to have a blended family full of love and support – and this includes many, many grandchildren. This dynamic and dedicated man of God loves helping others experience the power of God’s love and grace.